Playing with the Orbs 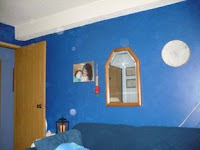 I've been fascinated with orbs and portals since I encountered a portal filled with other dimensional beings in San Diego in 2004 with some fellow Lightworkers after a channel from Steve Rother and The Group on the beach. It was the first time I was with other humans who could sense and feel things as I could. Sometime later I saw them in some pictures one of the girls had taken of Michael and I dancing with them. That started my quest for searching out the strange and unusual in pictures. I often surf real estate sites as there are tons of things to see in yards and houses.
A few months back I got a new digital camera. I have always loved to take pictures of things happening, I love the new digital technology as I can take pictures and save only the ones I want...anyway... I digress from my share...Since finishing my healing room and wanting to publish pictures of it on my site, I have captured several Orbs in my healing room...hence began the next step for me... playing with the orbs... I asked in my morning meditation the other day what were the orbs... I got back that they were beings from other dimensions of time and space observing the evolution of humanity. I also got that when I travel in my meditations...if someone took a picture of where I went.... I would appear much the same way. Very cool I thought to myself.... so... I decided to play with the orbs...see how and if I could communicate with them and on what level... I took a picture of before my meditation in my healing room that morning and then one after... the one attached to this share is the picture after...there were all these Orbs everywhere...it was soooo cool to see... I could feel them... I took several around the apartment, scanning for them first and taking pictures in areas where I could feel or see them. It was amazing to experience as well as feel the love that was all around my sacred space. I've spent the last few mornings with them, and will share more soon. Enjoy!
Posted by Sharon at 6:31 AM No comments:

Sharon
Sharon Taphorn, Author of Angel Guidance-Messages of Love and Healing, and Angels, Guides, and Other Realms is an international teacher, healer,writer, author, mystic and guardian of Mother Earth. She is here at this time to guide and assist humanity through this great awakening, this time of great change, as Mother Earth and all her Beings to a higher dimensional compassion. She shares her wisdom, spirit, and passion around the world through her various Radio programs on Shifting Times Radio, as well as offers a variety of workshops on Healing, Expanding Consciousness, Meditation and Spiritual Growth. As a gifted intuitive, Sharon also offers Personal Guidance Sessions and OverLight Spiritual Coaching Sessions both personal and business. My Home Page is www.playingwiththeuniverse.com If you have artwork,or pictures you would like to showcase, send me an email.